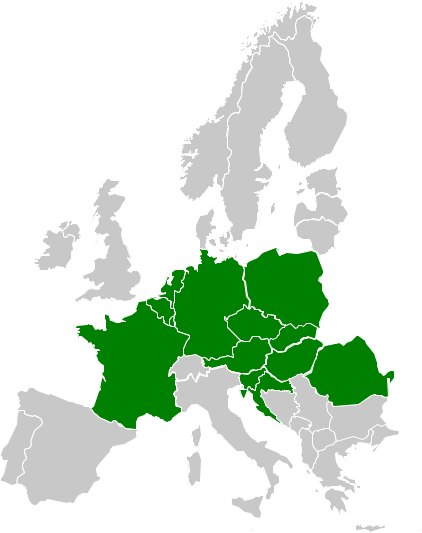 Flow-Based approach stands for a capacity calculation method in which the physical limits of the network are based on available margins on critical network elements (branches) and power transfer distribution factors which are defined for every critical branch and every bidding zone within Core CCR. These factors describe how a change in the net position (import or export) of each bidding zone changes the power flow at each critical branch. The computational algorithm then searches for the most optimal energy exchanges between bidding zones. In comparison with the current Net Transmission Capacity (NTC) method the FB method further improves economic welfare. The FB method is based on a more sophisticated manner by taking into account multiple parameters and optimization conditions and therefore better reflects realistic network conditions.

Flow-Based capacity calculation method is required by the Commission Regulation 2015/1222 establishing a guideline on capacity allocation and congestion management (Article 20) also called as CACM Regulation and represents the important part of the European target model.

History of the project

In May 2015 the transmission system operators in CWE region (including Belgium, France, Netherlands and German-Austrian- Luxembourgish bidding zone) successfully implemented the FB method.

In June 2016 the Core CCR was created based on the ACER decision 06/2016 on the electricity transmission system operators’ (TSO) proposal for the determination of capacity calculation regions.

In September 2017 Flow-Based Capacity Calculation Methodology developed jointly by all Core CCR TSOs was submitted to regulatory authorities (NRAs) for adoption based on the Article 20 of CACM regulation. In April 2018 the methodology was returned with a request for amendment. Two months later the TSOs resubmitted the methodology. Eventually, the NRAs did not reach a unanimous decision. The methodology was escalated to ACER and in the final form published in February 2019.

There are several important milestones to be finished before the Core Flow-Based Market Coupling goes live.

Parties currently directly involved in the Core FB MC project are listed in the following table and the links to the website of each party can be found below:

We'll send you an email with instructions.